Written by Jenny Marrs on November 3, 2019. Posted in Fixer to Fabulous. 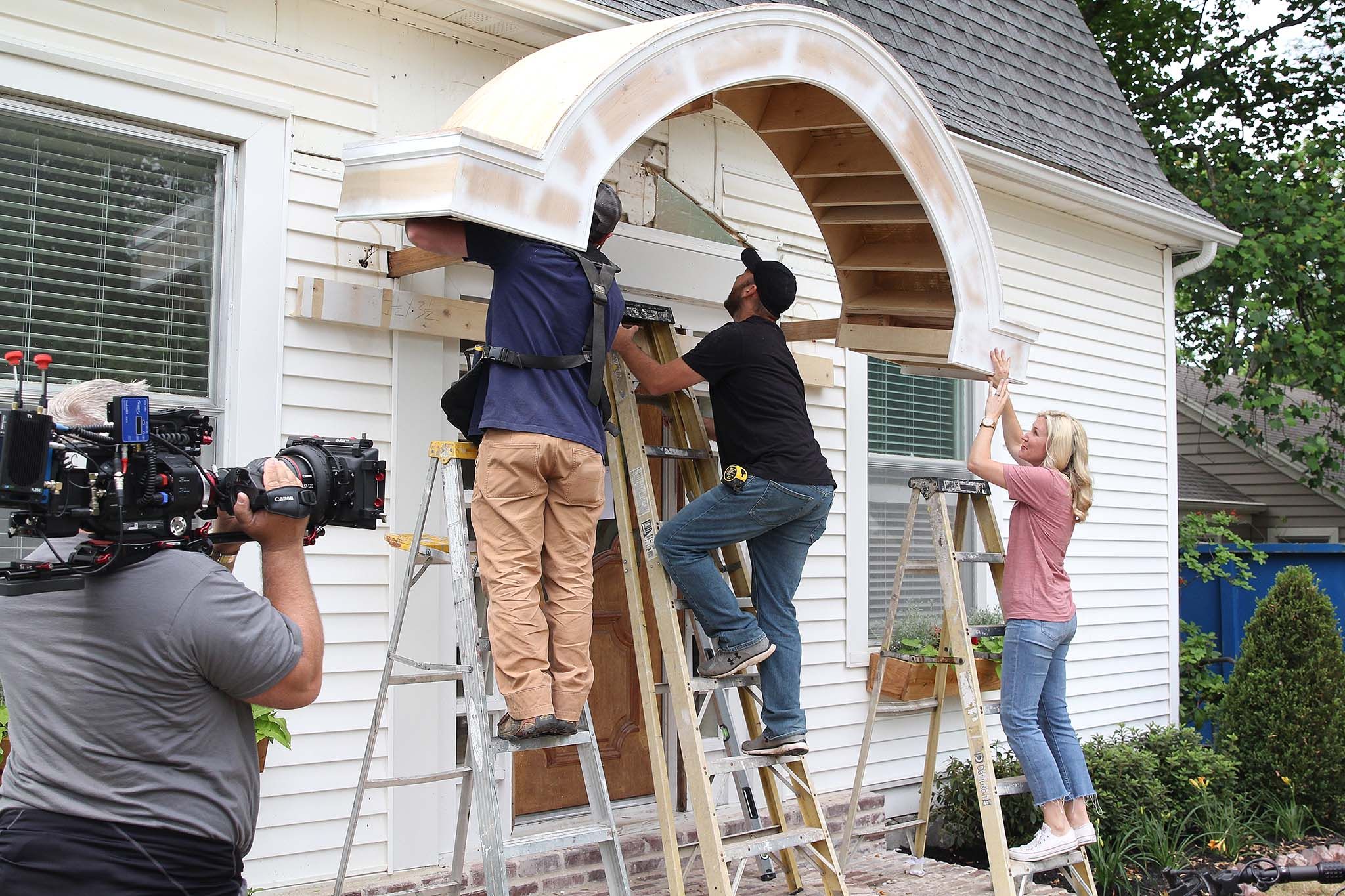 This week’s episode of Fixer to Fabulous was a fun creative challenge for Dave and I. The homeowners, Mary Christine and Ryan Neal, have two small kiddos and they asked us to REMOVE THEIR PLAYROOM (insert shock and awe). As a mom of five, I know this is blasphemy in the eyes of little people. Yet, it had to be done. Their existing kitchen footprint was TINY. And, I don’t mean “we-can’t-host-dinner-parties-in-here” tiny. I’m talking “we-can’t-open-the-fridge-if-someone-else-is-standing-in-here” tiny. While the kitchen/playroom situation was the biggest challenge we faced with this remodel, we also transformed a few other spaces, keep reading on for all of the details…

BEFORE: a historic home full of potential.

The exterior of this house was a blank slate – lacking the charm and character reflected on the inside. To fit the era of the home, we added a front porch with a classic “eyebrow” shape to protect the front door as well as give the Neal’s a more formal appearance to the front of their home. The crumbling concrete sidewalk was replaced with a “new” (reclaimed) brick walkway to accompany new landscaping to warm up the entrance. Finally, we added real cedar shingles to the dormer siding to give it a slightly modern and warmer look. All of these seemingly small changes brought this adorable home to life.

AFTER: a charming Dutch Colonial.

BEFORE: lack of function for this foodie family of four.

The existing approximately 60 square feet of kitchen space wasn’t functional for this family of four. The Neals run a farmer’s market and own a local blueberry farm and asked us to design a kitchen that reflects their love of both cooking and family.

Their biggest complaint with the kitchen was that they weren’t able to watch their kids while cooking, as it was closed off from the playroom. The small powder bath between the kitchen and playroom wasn’t often used and created a problem because it completely separated the two spaces. In order to make the kitchen more functional and family-friendly, we removed the powder room (with the Neal’s consent) in order to create one large kitchen with an island and plenty of pantry space.

Although this is a dutch colonial home, the Neals have a love for mid century design. We were able to introduce clean lines and laminate cabinets into their kitchen while keeping true to the classic character of their home. The bright laminate cabinets, white countertops and natural light helped open up the formerly cramped space.

We had to think creatively when it came to a new area for the kids and discovered a large space under the staircase that could become the perfect spot for a tucked away playhouse while still being visible from the kitchen. We kept the front portion of the coat closet in tact for storage and used the back half of the space for the kiddo’s new playhouse complete with custom wallpaper created from images I had taken at their family farm. We also matched details from the exterior of the Neal’s home to the playhouse facade which gave their kiddos their own little home for play time. The new built-in window bench seat in the dining nook also served as hidden storage and a place to stash toys when dinner’s ready.

(And don’t worry, we know how quickly kids can outgrow a play space, we made the playhouse facade easily removable for when the time comes that they no longer want a playhouse in their kitchen).

AFTER: A sleek mid century design where the family can congregate, play and cook in one space.

BEFORE: an overgrown, unused outdoor space.

The Neil’s home had an overlooked mini atrium space that was inaccessible from the inside of the house. As soon as I saw it, I knew it could be used as an unexpected and cozy patio. We swapped out the windows for a set of french doors, installed brick pavers, Dave built a pergola and we hung window boxes for fresh herbs (since I know Mary Christine loves to garden). This secret little nook became a serene spot to tuck away and read a book or sip coffee in the morning and ended up being one of my favorite spaces from this project.

AFTER: an unexpected and cozy patio retreat.

Walking into the existing master suite addition was like stepping into a different decade. Popcorn ceilings, stained oak trim, beige carpeting – it’s apparent this addition took place in the 70s and it felt disjointed from the rest of the house. In an effort to tie the space into the original home, we continued the wood flooring throughout, painted the trim white and gave the entire space a facelift.

Because Mary Christine loves bold pops of color and tropical details, I decided to create a boho-meets-mid-century-modern retreat in their new master bedroom. She had requested a tropical wallpaper that I couldn’t make work within our budget constraints, so I got creative by bringing in a local artist to help create an accent wall using stencils that emulated the palm frond wallpaper Mary Christine loved. We also painted the brick fireplace to lighten up the space, swapped out the mantle with a custom white oak beam and installed new french doors. The result was the tropical oasis the Neal’s had asked for.

AFTER: a bright tropical master suite.

I hope you enjoyed the tour of the Neal’s Modern Dutch Colonial!